Many businesses already see the value in assessing their employees’ personalities and behaviors with a DISC profile. But many forgo these assessments and the many benefits they add to their business because they simply don’t understand what a DISC profile is. Let’s take a closer look at what exactly goes into a DISC profile and how the assessment describes an individual’s behavior. 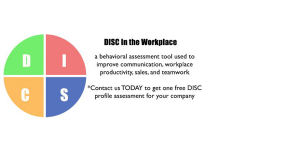 The assessment tool is based on a model created by William Molton Marston, a respected lawyer and psychologist, and it looks at four key factors to help describe an individual’s behavior traits. Marston is also credited with creating the world’s first polygraph lie detector test. The model is used to identify traits such as the following:

Plato wrote that the first and best victory is to conquer self. But the problem is that your employees can’t hope to conquer themselves without first knowing themselves. By using the DISC assessment tool, leaders will be able to more effectively manage their employees and set goals and challenges that better reflect individual personalities and aptitude. For example, imagine the ineptitude of casting an employee who leans more toward the creative side in a sales position (instead of a persuader/promoter).

The aforementioned traits are largely derived from his book titled Emotions of Normal People, in which he claimed that people express their emotions and feelings through four main behaviors including dominance, influence, steadiness, and conscientiousness. The following are some common behaviors within these four categories.

The assessment tool helps uncover and identify combinations of these traits to describe a complex behavior. By understanding behavior types, strengths, and weaknesses, an organization will be able to increase teamwork, productivity, and internal processes.

It’s one thing to identify and admire brilliantly designed business cultures, but an entirely different matter to create one. For help developing your business culture, contact John M. Ruh and Associates.

John M. Ruh and Associates are mission based business advisors who partner with growth oriented leaders to create the right P.S.T. support: the right People, the right Structure and the right Tools.

Subscribe to our blog to get more info and articles.